Homer Johnson joined The San Diego Anglers in 1991 as a charter member. He spent many happy days aboard the “Lucky J”, his beautiful 33 foot Laguna. His passion was Marlin and Tuna fishing. At age 82, Homer landed a local 130 lb. 8 oz. Bigeye Tuna on 30 pound test line. Homer’s good nature, perpetual smile and pleasant disposition was always heartwarming and reflected the true gentleman he was. On April 27, 1998 Homer Johnson passed away at age 85. He is remembered as a gentleman as well as a sportsman. In 1999 the club created the Homer Johnson Memorial Perpetual Trophy in his honor.

The winner gets temporary custody of the trophy for 1 year, after which he/she agrees to return the trophy to the club. 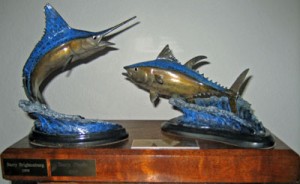 Thank you for reading!

Our meetings are currently being held on the 2nd Wednesday of each month at the Portuguese Hall on Point Loma. Located at 2818 Avenida De Portugal, San Diego, CA 92106.
Read More

November 3rd is the kick-off for EARLY MEMBERSHIP RENEWAL. All San Diego Anglers who renew In November & December will be entered To win 2 Awards Banquet tickets.
Read More